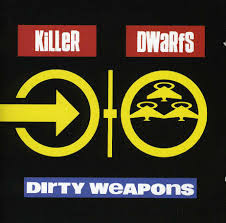 
With over 1600 albums in the physical CD collection, things get lost and forgotten about. Lately, I've taken to pulling random discs out of the racks and ripping them to my laptop so I would have some portability. Earlier tonight, I pulled this one...

I remember some time back we owned two other Killer Dwarfs albums along with this one, but they were all part of a batch of discs we had to sell when Lo' and I were absolutely dirt poor and bills had to be paid. Of the three, this was the only one I made certain to reacquire at a later time.

When it came out in 1990, Dirty Weapons sort of just fell through the cracks. The sounds on this album were a touch tougher than the hair metal that was in the process of falling out of favor, but it didn't have ANY of the self-referential loathing that came with the advent of grunge a couple of years later.

Given today's definitions, I would classify this collection more Hard Rock than Heavy Metal, but back in the '90s, it fit right in alongside Anvil, Saxon, and Def Leppard. The Dwarfs were not as shred-tastic as Iron Maiden or Metallica, and they didn't have the sleaze of Ratt or Motley Crue. What they did have were really solid chops, with basic (but crunchy) riffs, tasty leads (provided by Mike Hall (a.k.a., Mike Dwarf), and a more than competent vocalist, Russ Graham (a.k.a., Russ Dwarf), who should have gotten more recognition than he did.

Highlights on this platter include the title track (about as political as they got), Doesn't Matter (a power semi-ballad that they felt strongly enough to re-record it for the album that followed this one), All That We Dream, and my personal favorite, Comin' Through.

Is this an album that should have changed the world? No. It's solid, blue-collar, rock-metal with enough bite to appeal to most folks who like that sort of thing. Dirty Weapons is not something I'll drag out a lot to listen to, but our collection would be weaker with its absence.

GopherDave's Rating: 5.5/10 (Solid, not unpleasant to listen to, and it will not drive you to wander the countryside killing hookers with a spoon...)
Posted by GopherDave at 01:42

Email ThisBlogThis!Share to TwitterShare to FacebookShare to Pinterest
Labels: Music