[MONDAY MUSIC] – EAT/Sell Me A God 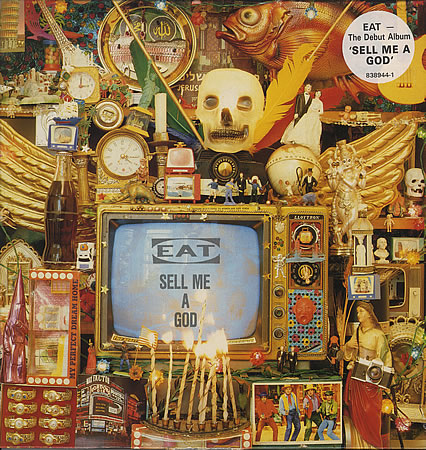 I first encountered Eat while watching MTV back in the late 80s when they still showed music videos. I honestly cannot remember what the video was that I watched, or even if I liked it, but the band name and the album name stuck with me in that distant way. I wasn’t going to go out of my way to find it, but if I ran into it, I might give the record a shot.
Fast forward some twenty years while I was making a purchase from one of my favorite places for used music, Second Spin, when the name somehow made the trek from my sub-conscious to my conscious mind. I shrugged and typed the band name in the search. Sure enough, Second Spin had the disc for something like three dollars. I figured what the hell and gave it a shot.
The shipment came… I listened to the album… and promptly filed it away. It was okay, but I had gotten like twelve albums with that order and a couple of things had grabbed my attention in more immediate ways. Sell Me a God does make its way out of the collection every now and then, and here’s what I think about it…
Take some pop-oriented, swamp blues… filter it through some late-80s British alterna-hip sensibilities… have it played by competent musicians… serve to taste.
Now, Eat is a good outfit, and Sell Me a God has some standout songs (namely “Walking Man” and the bouncing “Things I Need”) that elevate the album into “worth listening to”-status, but this is not essential music. If you have anything by the Wonder Stuff or the , you’ve got stuff in a similar vein that falls in between those two bands. Not as poppy as the Stuffies, nor as intense as the Mansions, but a nice median that disguises the gems that are on the record.
“Gyrate” takes and builds on a nice hook from bassist Tim Sewell (who’s good throughout, as is his partner-in-time, drummer Pete Howard), but the lyrics and vocals do nothing to serve the tune.
“Summer In The City” is a cover of the iconic Lovin’ Spoonful tune. I like the original, and this version is serviceable, but nothing stellar.
In summary, if you can find iTunes/mp3s of “Walking Man”, “Things I Need”, and “Gyrate”, and you’re looking for something a little odd and retro, pick ‘em up. If you’re a completist, get the whole album. Just be prepared to hit the track advance button a fair bit.
GopherDave Grade: 5.3/10
Track Listing
01.
02.
03. Fatman
04. Stories
05. Walking Man
06. Skin
07. Red Moon
08. Insect Head
09. Body Bag
10. Things I Need
11. Judgement Train
12. Gyrate
13. Summer In The City
14. Mr. & Mrs. Smack
Lyrics Copyright © 1989 Fiction Songs . Used without permission, but with no intention of infringement.
Posted by GopherDave at 01:00