I got fresh ink done today, and had planned to put on "the uniform" afterward. Then the aftercare explanations came and I had forgotten a couple of items that would have had me taking off the uniform within an hour or two of putting it on. So, I figured why even bother, since it is 40K night and the lovely Loquacious is holding down the fort. So the resolution is technically broken, but the habit it has instilled is most assuredly not.

As for the tattoo itself, it's a family piece. The angel represents my darling wife. The star is for our son, whom we called "our little star" when he was very young. The pumpkin is for our daughter, who is my little pumpkin girl that is growing up WAY too fast. The sack of money is for the dog, Cash.

This isn't my first piece of ink. I got one some years back that represents me and how I believe in myself... 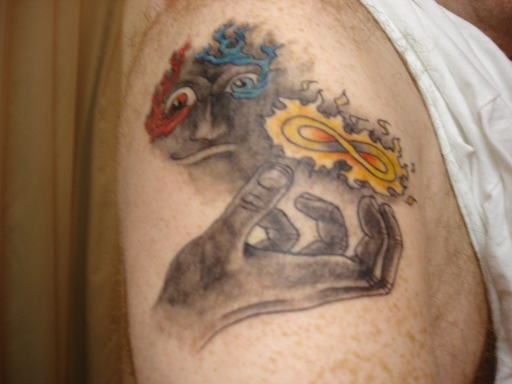 Both pieces were done by Matt Diana at No Regrets Tattoos. I liked his work with the first piece enough that I tracked him down after he left the shop in town that he was originally associated with. If you're in the area and want some ink done, look Matt up. He's a very talented guy and will give pretty much what YOU want on your body, and not what he thinks you should have, unlike many tattoo artists I've met.