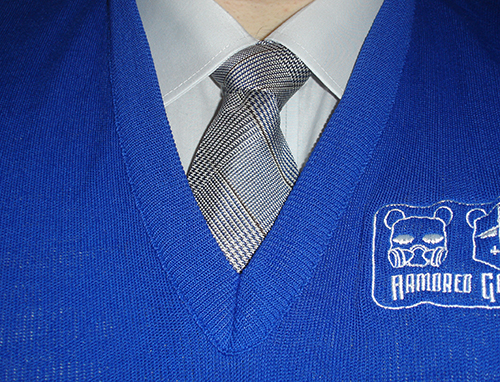 [NOTE: This entry was started of February 9th. Almost there, folks...]

Well, with two semi-successful runs down in the convention, it means we are at the halfway point and on the way down...

Saturday evening found me looking across the screen at five players, one of whom hadn't role-played in about fifteen years, all waiting for some X-Files-esque goodness. I don't think I disappointed...

It all starts with our players. They are agents of a secretive government organization known as Q-Division. They know that there are things that go bump in the night, and Q-D Agents are the ones who bump back.

Our story begins with tales of a new street drug called Sueno Crystal. The drug gives the user sharpened perception (think the color saturation from the movie Dredd during the Slo-Mo scenes, but without the loss of speed), as well as other effects that vary upon the user. Invariably, though, most long-term users experience a psychotic break. Those that do not end up dead talk of hearing voices and seeing "other worlds". Until that break happens, many of the users have been reported purchasing various innocuous items, mostly electronics but other stuff as well, and either shipping those items to or leaving them at a number of different drop points.

The latest victim is one James Lassiter, former 25-year police veteran turned private detective in retirement. As straight an arrow as it got, but he is currently locked up in the loony bin after turning into a raving lunatic from a forced dosage of SC.

Going to Lassiter's apartment, they find the place already tossed, with the computer tower smashed and the monitor shattered. Once the agents clear the place, Agent T (the "Tech" agent) gets to work and in short order, is extracting information from Lassiter's desktop. It turns out that Lassiter was working on a divorce case where the husband was suspecting the wife of infidelity. Turns out the husband was right, and the "happy couple" met regularly at a bar called "Love On The Rocks". Doing a bit more digging in the apartment, Agent P (the low-level psychic of the group) uncovers a cache of high-end digital video and still photo equipment. All of it has had it's internal memory wiped and any external memory storage that would used for the equipment cannot be found. On a hunch, Agent T digs further and finds photos taken at "Love On The Rocks" of two men, both well dressed, but otherwise looking very suspicious based on the sequence of images taken.

So, in an effort to cover more ground and cover all the bases, Agent P and Agent T go back to the office to run background and financial checks on the bar, the philandering couple, and the two suspicious guys. Agent D (the driver) canvasses Lassiter's apartment complex trying to further size up the victim and see if he left anything useful with a neighbor. Agent G (the goon) and Agent L (the Leader) went to Love On The Rocks to stake out the place and ask questions of the bartender. The bartender is giving off very vague and non-committal answers to Agent L's inquiries when Agent G spots our two well-dressed but oily gentleman entering in through the back way. Agent G goes to confer with Agent L on what they should do, and as he does so, gets made but the two guys. The suspects duck back the way the came (out the back), and after a few precious moments of discussion, Agent G follows them while Agent L heads out the front way. When Agent G hits the back he sees the larger of the two men standing outside of a waiting car. The big guy turns, gets angry and heads right for Agent G. The car speeds away, almost hitting Agent L as he turns the corner into the back alley, but Agent L thinks quickly and gets the license plate number. Melee ensues with Agent G trying to out punch someone who is getting stronger by the minute. In a desperate attempt to stop him, Agent L shoots the guy a handful of times and barely slows him down. Finally, Agent G lands a blow that knocks the goon out, and as he falls unconscious, his body begins to regress into a form much slimmer that what it began.

Taking the unconscious goon back to headquarters, a number of things fall into the place. The goon in question is on record as being a low-level enforcer for a low-level mafia group. Said group's territory is nowhere *NEAR* Love On The Rocks, so he's either moonlighting, or he's moved on to better things. Searching the now emaciated thug, finds him wearing a pinkie ring with a luminescent pale blue stone set in it. Analysis of the stone finds it to be pure, uncut Sueno Crystal.

Running the license plate number, the car is registered to an Alan Tourmaline, whose only known address is in the warehouse district of the city, and whose existence is only about six months old.

Going on a hypothesis of otherworldly mental possession, the agents theorize that even the cut version of the drug allows for some minor mental control of the subject, and thus is very dangerous. So, time to storm a warehouse.

The agents approach the warehouse in ubiquitous government panel van. They notice security cameras on the building, so any approach will be seen. The agents also notice goons loading up three vans with small equipment and three body bags?!? The mention of body bags throws the agents into action and no semblance of a plan is followed. The goons with the bags, though, aren't being paid enough to deal with federal men-in-black type of heat. They drop everything and run. The bags hit the ground with the sound of rocks and gravel. Agents L, G, and D approach the warehouse as Agents T and P inspect the contents of the bags and the vans. The vans are full of small rock tumbling and grinding equipment. The bags each contain on bipedal, crystalline shape. Upon touch, Agent P's psychic senses go off of the scale and she knows that things are very, very weird.

Entering the warehouse, Agents L and G find it mostly empty except for some cover in the back and the skinny sleazeball from the pictures wielding two pistols and now wearing a hat(?). Gunfire ensues with no one really hitting anybody for the initial few rounds. Agent D heads around the back way to find the back door already open... odd. However, he goes in anyway in an effort to cover "hat-guy's" means of escape should things turn ugly. Agents P and T join in the firefight, with Agent P psychically imploding hat-guy's chest. Due to the amount of bullets now heading his way, and a sucking internal chest wound, hat-guy takes enough hits that he determines escape to be the wisest course of action. As hat-guy reaches the door to take him out of the back, he sees Agent D, who then becomes frustrated as hat-guy is shot from behind by Agent T for the kill-shot.

Searching the now-dead body of hat-guy, the agents find what looks to be a metal spider-mount holding a chunk of Sueno Crystal attached to hat-guy's head. Staring at his guns, one looks to be a normal pistol, while the other fires needles of crystal. Further searching determines that Alan Tourmaline is still out there, having left out of the back door before the agents arrived.

[Summary: "Alan Tourmaline" was one of four aliens that crash landed on Earth about twelve months ago. Its three compatriots did not survive the crash. Using its considerable mental abilities to stay hidden, the entity was trying to find a way to escape Earth before being discovered. Doing a little research into human behavior, the entity discovered that powder from its dead compatriots had a profound effect on humans when used as a street drug. One, it got us poor apes high as kites. Two, it made *REALLY* susceptible to suggestion and mental domination. Thus, it started a small criminal empire in an effort to fund a new ship to escape the atmosphere. Simple, really...]   =P

This was one of the coolest games I have run in a while, and one of the better story plots I had devised for the convention. Kudos to the group involved. They kept me on my toes...