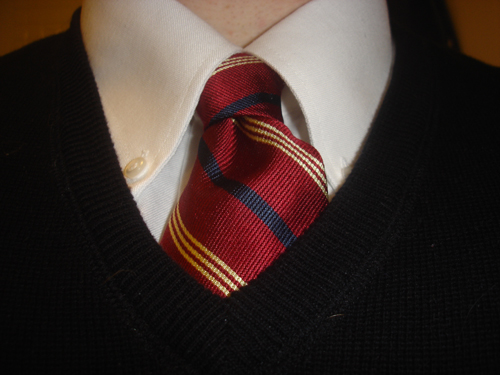 Not much is happening on the clothing front except what's becoming the same old-same old. I still have not repeated wearing a neck tie yet since this started, and as I've stated before, I could probably keep that up for a few months. However, if the store sweaters arrive in time, I've already got some combinations in mind that will use some of the ties I've already worn this month. So there goes that potential streak.

I may try to do something like that in the future to keep it interesting for me, like doing a no-repeat month, or nothing but stripes, or even nothing but knit ties for a month. Who knows...

For business, Wednesday is usually one of my busiest days. Not from a sales perspective, but this is the day when the majority of our shipments come in. So there's check-in, system input, pricing, shelving, pulling special orders, updating the web site, yadda-yadda-yadda. Speaking of which, UPS just pulled up... Gotta go.