[Music Review] - In Flames: "Sounds of a Playground Fading" 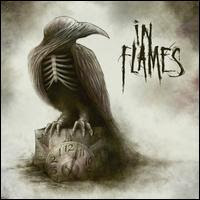 I’m sitting here listening to the (relatively) new In Flames album, "Sounds of a Playground Fading" for something like the twenty-fifth time since I bought it. In that, I have come to a couple of conclusions…
1) The band is getting more and more radio-friendly (whatever that means) with each record…


Basically, I cannot conceive of any radio station actually playing a band like In Flames in this day and age. It’s not auto-tuned garbage for the new millennium, and so-called “rock radio” has lost its balls over the last decade. If it ain’t the new Disturbed or Avenged Sevenfold, they’re not playing it…
I’ll be honest… I was kind of worried coming into this one. The last IF album ("A Sense of Purpose") left me REALLY cold. That combined with founding member (and main music writer) Jesper Stromblad leaving to handle personal issues, I was not feeling all that confident that In Flames could pull off anything coherent, let alone good at this point...
In short, this album rocks… The guitars soar, Anders vocals are actually understandable in some places, and the drummer (Daniel Svensson) propels the best moments with driving authority. It does start to fall apart a bit near the end, but bad In Flames is typically better than most rock/metal bands out there currently.
Standout tracks include the title track, lead single “Deliver Us, “Fear is the Weakness”, “Where the Dark Ships Dwell”, and “Darker Times”. There are also couple of interlude tracks (“the Attic” and “Jester’s Door”) that slow things down. “The Attic” is interesting, but “Jester’s Door” really could have been left off. It interrupts the flow of the record, almost bringing the momentum to a screeching halt. It might have made a good leadoff intro, or a quiet closing piece, but its placement in the track listing is just kind of enigmatic.
Anyway… go listen… Or better yet, go buy the damn thing. It’s worth it.
Track Listing
1)     Sounds of a Playground Fading
2)     Deliver Us
3)     All For Me
4)     the Puzzle
5)     Fear is the Weakness
6)     Where the Dead Ships Dwell
7)     the Attic
8)     Darker Times
9)     Ropes
10)  Enter Tragedy
11)  Jester’s Door
12)  A New Dawn
13)  Liberation

Email ThisBlogThis!Share to TwitterShare to FacebookShare to Pinterest
Labels: Music