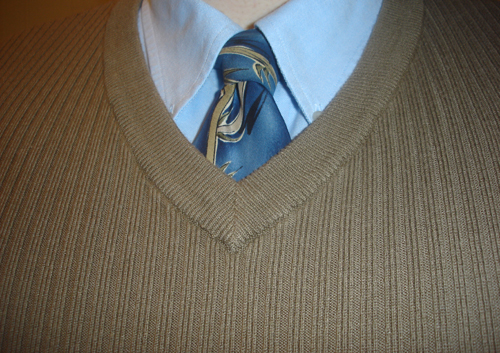 Look, Ma! Fifteen days in and still on course despite the ADD/Bi-Polar side-effects of having the attention span of an epileptic gnat. Nyah, world. I say... Nyah!

The tie today is a J. Garcia that I picked up as part of a combined lot on eBay some years back. Now, J. Garcia stands for Jerry Garcia, now deceased leader of the Grateful Dead. Seems he had an artistic side, and someone convinced him that his art would look good on a necktie. To be honest, most of it does. Heck, I like the look of the tie I am currently wearing. What I don't like is the feel. It feels thin and like it has no substance to it, which makes it difficult to get anything resembling a good knot out of it.

Now, the MSRP for this line of neckwear was $45.00 a shot. Not horrible, but not cheap either. For that money, there should be some heft to it. There's isn't. I've gotten $8.00 silk ties from K-Mart back in the day that had more "oomph" than this tie.

Still, it looks good, and I did get it cheap... So I guess I can't complain too much...

Oh who am I kidding? I couldn't even type that "no complaining" line with a straight face.

Okay... This tie is made by hippies for hippies, and it feels like it. People should generally stick to what they know... I mean, there's a reason you don't see Brooks Brothers selling tie-dye t-shirts. It's not their thing. So why did the supposed counter-culture put their mud-covered toes into an arena (conservative menswear) they purportedly wanted nothing to do with for 20+ plus years while they were burning draft cards and frolicking naked in fields?

I couldn't tell you... I haven't smoked that much dope in my lifetime yet.