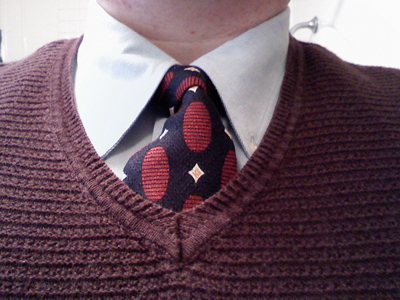 I was in a small panic this morning as either my wife took her camera with her to work this morning, or I just couldn't find it. Then I remembered my old cell phone was around somewhere. While we cancelled the cellphone plan a while ago, the thing still works as a camera, so...

Trouble is, it's not a great camera, and between the light and the camera, the color of my shirt is way washed out. Just imagine it being a light blue oxford instead and you're close enough.

As I stated yesterday, the wife and myself and some friends went and looked at some larger retail spaces. Out of the six we looked at, we've ruled out three immediately. There is one that has been ruled out IF the landlord remains inflexible about combining spaces. Even his largest space is smaller than we wish to move to, but he has several units in the same strip mall adjacent to each other that could be combined into a larger unit which we would be interested in.

The two we liked the most, are beautiful. Each is very spacious and would require very little work to be ready to move into. Trouble is, the rent is a bit higher than we'd like on both of them, and I am not thrilled with either of their locations in terms of where they are at within the town.

Overall, my gut instinct did not scream at me like it did when we moved to our current location or when we looked at the space offered to us back in November of 2010. A location can meet all of our other factors and criteria, but if it doesn't pass my initial "gut check", then I am eminently less interested in it than I possibly should be. Sue me.

Sales at the store continue to be pleasantly steady. While I do not expect the current pace to keep up, if it does, then the rent for those other spaces becomes much more doable. It'll also lead to us hiring actual employees and expanding store hours and all those things which will honestly boggle my mind. These situations will require me to be less hands-on and more supervisory at the store. That'll be difficult. I'm a good employee, but I am not the best supervisor in that I don't always trust people to do the tasks I assign to them to the standards I want them done. I tend to hover and want to immediately "fix" what they are doing wrong in front of customers, thus embarrassing the employee. I'll seriously need to work on that.

Oh well, I have errands to run. Until no later than tomorrow...

Email ThisBlogThis!Share to TwitterShare to FacebookShare to Pinterest
Labels: 362, Rant